Lynnlea Shelties began in 1969 when we purchased a Sheltie from a pet store—NOT the place to get any pet. Robbie became Ashford's Laird Robroy CDX, Can. CD. Ashford was our original kennel name but its use was disallowed by the AKC in 1975 and so we settled on Lynnlea. Lynn is our daughter's middle name and "lea" is Old English for meadow. We had just moved to five country acres southwest of Chicago and "lea" seemed to fit.

Robbie's obedience career ended when he developed hip dysplasia, not uncommon in a pet store dog.  Still, he lived a good life until age 13.  We purchased our first show prospect, Westwood Lea Piper of Ashford CD, from the Lubins of Westwood Shelties in 1970.  Piper became one of our foundation bitches and produced our first homebred Ch. Ashford Promises, Promises CD as well as the ASSA National Best of Breed (1983) Ch. Lynnlea Forever Amber CD.  Amy was the first veteran to win the National Specialty.

We continued to compete in breed and obedience but as we became more involved in club activities, obedience eventually was dropped. I personally titled 11 C.D.'s and 1 C.D.X. but many of those we sold continue to win titles including OTCH Bertic's Royal Randy.

We are both charter members of Interlocking Shetland Sheepdog Club of Monee. Dorothy has edited their newsletter since 1977 and we have both held almost every position several times over. Dorothy also belongs to Stone City Kennel Club in New Lenox and is a very active member in the American Shetland Sheepdog Association. She is a breed mentor for the ASSA and is head of the ASSA Sheltie Rescue Network, a position she created. 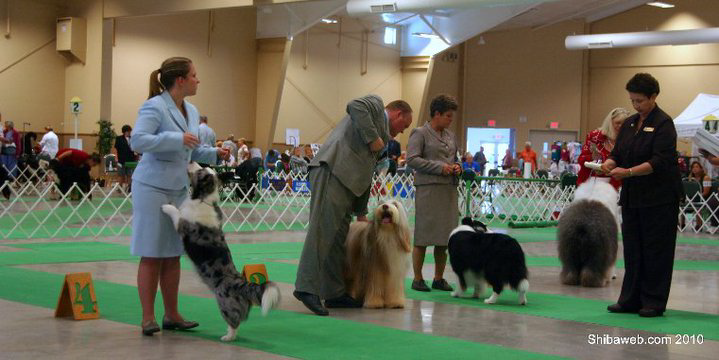 In 1987 Dorothy was AKC approved to judge Shelties. In 1992 she judged the ASSA National Specialty in Houston, Texas and again in 2001 in Riverside, California, and in 2009 in Perry Georgia. Dorothy also judged the Canadian Shetland Sheepdog Association National Specialty in April, 2002. Further highlights of Dorothy’s judging experiences include judging  Shelties and collies in Sydney, Australia in September 2002, and judging Shelties, Australian shepherds, and Australian cattle dogs in Finland in August 2003. Dorothy is AKC approved for the entire herding group.  Dorothy is also a member of the Dog Writers' Association of America and is a regular contributor to Sheltie International magazines.

We stress temperament and soundness. All our dogs are OFA-certified for normal hips, have passed their CERF eye exam and are DNA tested clear of vWD (VetGen) as well as tested clear for MDRI. We have bred or owned over 30 champions, with several others owned by others now close to their championships. We are also very proud of the many dogs we have placed that are winning titles and honors in obedience and agility. All of our puppies are raised in our home using

The Rule of Seven.

We are small breeders, never keeping many adults. We have puppies available on occasion to approved homes. We hope you enjoy seeing our dogs.

Here in This House

I will never know the loneliness I hear in the barks of the other dogs “out there'. I can sleep soundly, assured that when I wake my world will not have changed. I will never know hunger, or the fear of not knowing if I'll eat.  I will not shiver in the cold, or grow weary from the heat.  I will feel the sun's heat, and the rain's coolness,and be allowed to smell all that can reach my nose.  My fur will shine, and never be dirty or matted.

There will be an effort to communicate with me on my level.  I will be talked to and, eve n if I don't understand, I can enjoy the warmth of the words.  I will be given a name so that I may know who I am among many. My name will be used in joy, and I will love the sound of it!

I will be loved because I am who I am, not someone's idea of who I should be.  I will never suffer for someone's anger, impatience, or stupidity.  I will be taught all the things I need to know to be loved by all. If I do not learn my lessons well, they will look to my teacher for blame.

I can trust arms that hold, hands that touch...knowing that, no matter what they do, they do it for the good of me.

If I am ill, I will be doctored. If scared, I will be calmed. If sad, I will be cheered. No matter what I look like, I will be considered beautiful and thought to be of value. I will never be cast out because I am too old, too ill, too unruly, or not cute enough.

My life is a responsibility, and not an afterthought.  I will learn that humans can almost, sometimes, be as kind and as fair as dogs.

I will belong.  I will be home.